In an ideal world, no meal of mine would end without a bite of Motichoor Laddu, Kheer, Arise, Ravva Ladu or Mathura Peda.

It is too satisfy my sweet cravings that I purchased a pound of assorted sweets ($10.50) from Bengali Sweet Shop in Hicksville.

To add some spice, I added a pound of Pakoras and a Mirchi Bajji ($5) to my order.

Here is my take on Bengali Sweet Shop sweets starting with Besan Laddu: 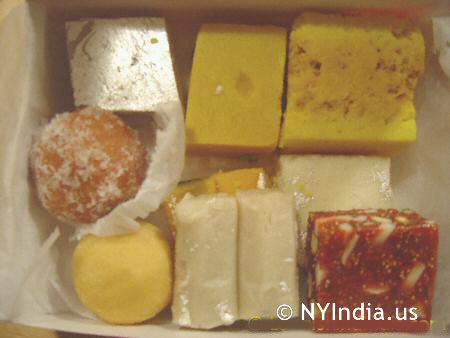 Disappointed with the sweets, I moved on to Pakoras and Mirchi Bajji little realizing the horror that lay ahead. 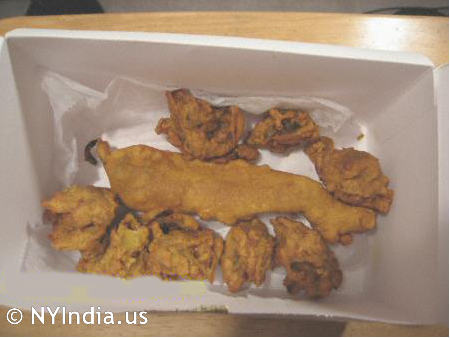 The mixed Vegetable Pakoras were obscenely spicy and badly lacking in right proportion of salt to balance the chillies.

The lone Mirchi Bajji did not provide the much needed relief.

You see the outer flour covering was too thick (see the picture below) and tasteless and ruined the joy of eating this popular Indian snack. 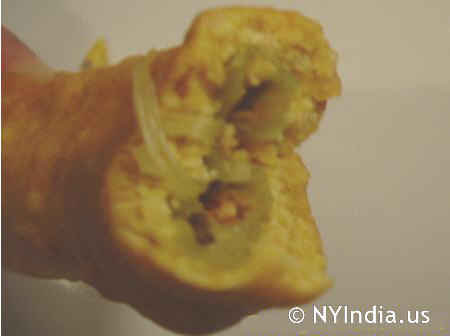 Awful Mirchi Bajji
Tamarind sauce was alright but nothing to write home about. 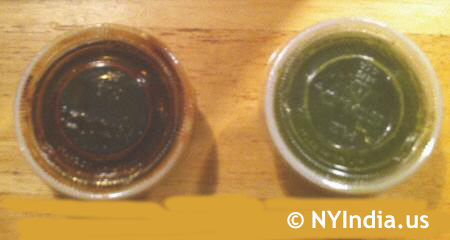 Green Chutney, Tamarind Sauce
But Green Chutney was bad. You see it was too watery and lacking in salt.

As you enter Bengali Sweet Shop, you have tables on the right, sweets counter on the left by the wall, food counter and kitchen in the rear.

Service at Bengali Sweet Shop in Hicksville is below par.

The desi waitress was rude and hopelessly inept in rendering professional service to paying customers.

Though there were no other customers and the restaurant was near empty, she became impatient with my selection of sweets and messed up my order.

While buying the sweets, I requested her to put only one piece for each variety of selected sweets.

But when I opened the box after coming home there were two pieces each of Kaju Pista Roll and Kesar Pista Roll.

Also, the dry Jamun some how crept into my box though I never selected that sweet. I am not a big fan of this dry Jamun with grated coconut topping.

Plus, my Pakora takeout order did not come with napkins.

All in all, I did not relish most of the sweets.

Vegetable Pakoras and Mirchi Bajji were awful with raw, uncooked vegetables and too much flour covering respectively.

If you love Indian sweets like me, I recommend you steer clear of Bengali Sweet Shop on Broadway in Hicksville. - © NYIndia.us